In 2018, Ugochukwu "Hugo" Uzoeghelu woke up in a hospital bed in Landstuhl Regional Medical Center in Germany. He was told he had suffered a traumatic brain injury during a training accident. The Army health care specialist and combat medic couldn’t speak or walk. He endured excruciating migraines. For months, he questioned if he would ever be the same.

The path to recovery was long and steep. After medically retiring almost a year later, he set out to rediscover who he was and his place in the world. Uzoeghelu graduated in May from Harvard Medical School and is now working to eradicate AIDS globally.

Veterans United Foundation awarded him a total of $27,000 in scholarships to alleviate some of the financial burden of his schooling. Uzoeghelu tells other Veterans that if he can do it, they can, too.

“I'm doing what I'm supposed to be doing,” he said. “If not for Veterans United Foundation, I don't know what my fate would have been in this program. This [scholarship] just reaffirms the fact that I am in the right place." 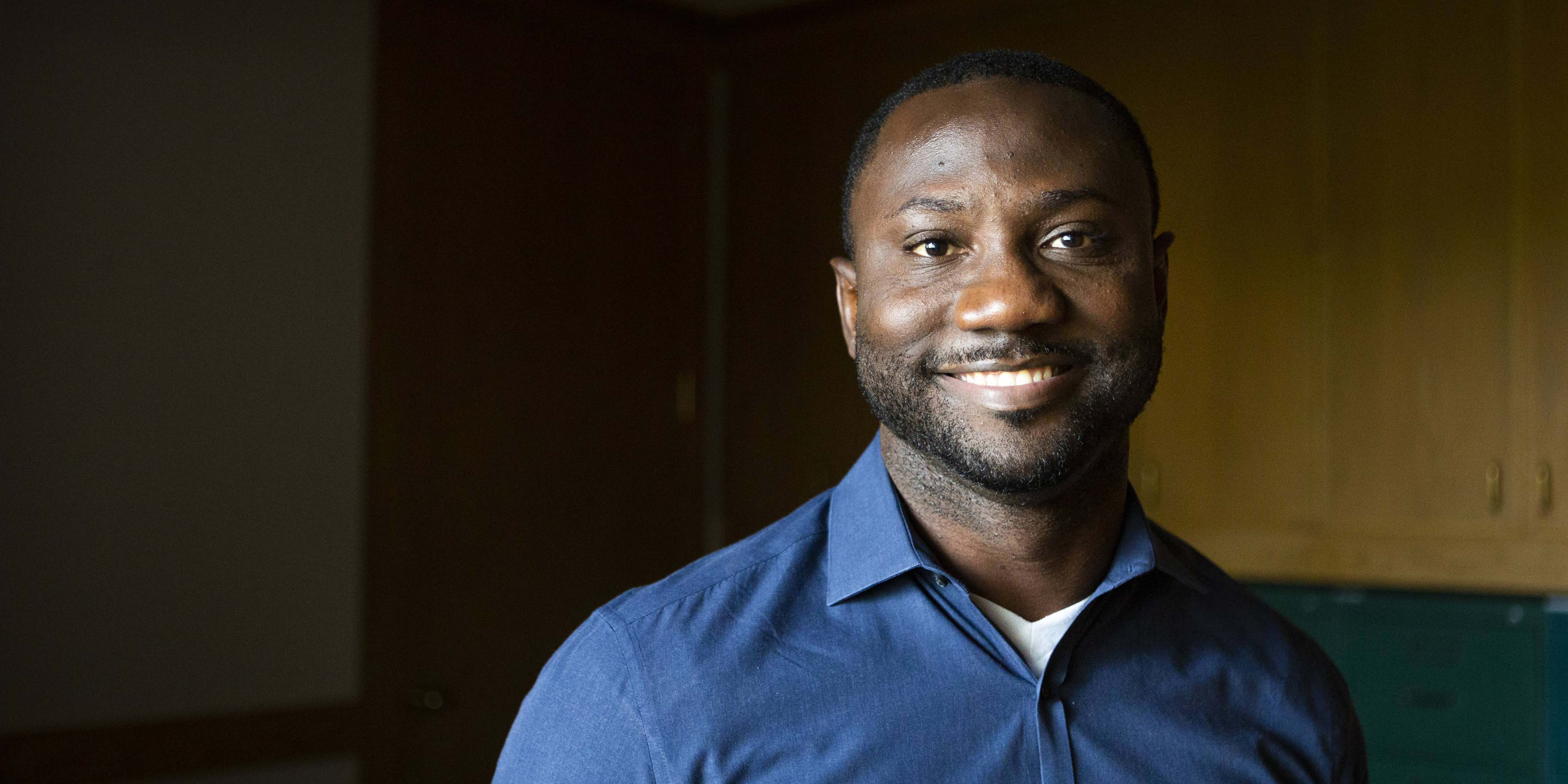 Photo courtesy of the Noble Research Institute
A background of service

Uzoeghelu is the youngest of six children. Born and raised in South Africa, he spent time in Johannesburg, where his father worked as a tax collector, and his parents’ home country of Nigeria.

During that time, South Africa was nearing the end of apartheid, the HIV epidemic was peaking, and a large percentage of people lived below the poverty line.

"They were worried about hunger,” Uzoeghelu said. “Nobody was interested in health care. When I saw people die from things that could have been easily prevented by immunization or simple public health awareness and education, it pained me. That's what drove me to clinical medicine. I wanted to see what I could do to help these communities."

Uzoeghelu said his parents always encouraged their children to live their dreams. With their support, he started gathering letters of recommendation and looking at graduate schools in the United States to further his mission and education. He wrote essays, filled out applications and took the TOEFL (Test of English as a Foreign Language).

“My parents had always taught us to go for what we want and be very driven in what we're passionate about,” Uzoeghelu said. “I grew up seeing my dad work so hard to provide for us, and I wanted to take that further. I wanted to be able to impact the world in a positive way."

With service at the heart of his core beliefs, Uzoeghelu ultimately accepted a full-ride scholarship to the University of North Texas, where he pursued a Master’s of Public Health. Through this program, he came to believe he could address health inequity on a global scale while also caring for individuals directly.

"I think it speaks to how I was raised and the environment I grew up in," he said. "You have to be able to deliver and help someone who can't help themselves. It's one of the reasons why I got into the military. I try to be very intentional in finding ways I can make things better."

Upon his arrival in Texas, the differences in time zone and culture made the first few months difficult. But Uzoeghelu quickly wrote himself into the American system.

As an international student on scholarship, he felt like he had a point to prove. A year into graduate school, he ran for the School of Public Health's student body president and won, becoming the first black man to serve in the role. He graduated in the top 5% of his class.

Shortly after graduation, at age 32, Uzoeghelu joined the Army as a healthcare specialist. He enlisted for multiple reasons. He loved the structure the military provides. He had also been in the U.S. for less than two years and thought it would be a great way to learn about what it means to be an American. In some circumstances, the military also offers a pathway to naturalization.

Uzoeghelu felt that combining military service with his commitment to the health and wellness of the population at large made sense.

"I not only wanted to provide medical care for our troops but to see what we can do in terms of advancing and promoting the public health system in the military," he said. 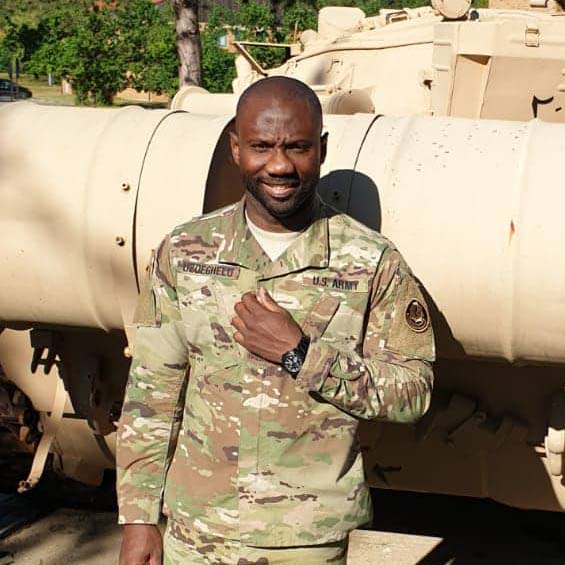 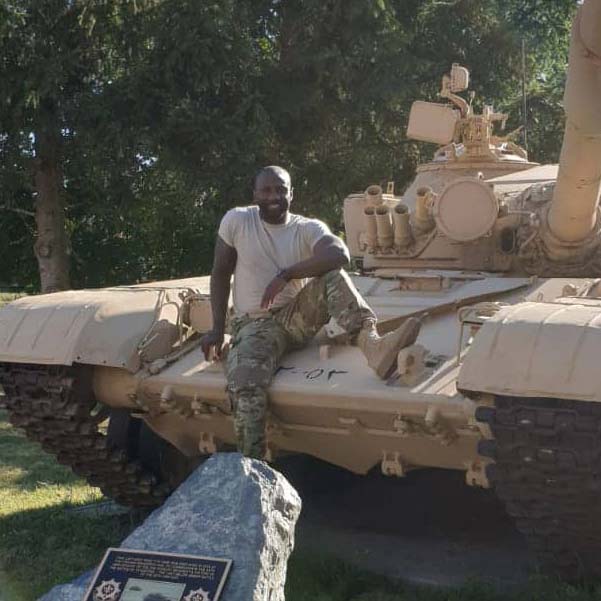 His military career took him to Europe, where he was stationed in Vilseck, Germany, as a health care specialist with the 2d Cavalry Regiment. This regiment is tasked with facilitating training exercises for both U.S. and foreign soldiers, readying them for potential deployment into active combat. He deployed from there into Poland, the Czech Republic and Latvia.

"My military experience is something I'm very proud of," Uzoeghelu said. "It's an experience that will be with me the rest of my life, but at the same time, it brings up a lot of emotions."

During a training exercise, Uzoeghelu fell from a one-story building. The resulting impact caused substantial trauma to his brain. When he awoke two days later, doctors explained the extent of his injuries.


"I remember when I was in the hospital, and the doctor told me that I might not be able to be me again," Uzoeghelu said. "I thought it was all over. I was just a shadow of myself. I had to start all over from the beginning just to realize who I am again."

He spent the next eight months recovering in the hospital. Uzoeghelu compared the rehabilitation process to hitting a reset button. Through cognitive, physical and speech therapy, spinal injections, pain management and neurological tests, each treatment helped him "reset" to normal.

According to his physicians, when dealing with a traumatic brain injury, there is beauty in that self-awareness. It represented the consciousness and cognitive function Uzoeghelu was slowly regaining. He didn’t talk to his family for much of that time, wanting to shield them from the magnitude of his injury. But they were always on his mind.

"The most important thing that helped me recover was the strength of my family," Uzoeghelu said. "I just thought I have to make it out of this alive because a lot is riding on it. Just thinking about my family, my siblings and everyone who loved me, is the reason I pushed through."


Looking forward to the future

A year passed. Uzoeghelu’s recovery was going well, but it became apparent the military wasn't an option any longer.

"I decided to go back to school just to relearn everything I knew before joining," he said. "It was tough, but I am here, and sometimes I get overwhelmed because it seems like I've been given a second chance."

When Uzoeghelu decided Harvard was his next move, he combed the faculty catalog to find clinicians whose work aligned with his goals and reached out to them. He put together a competitive application and was accepted into the Master of Medical Sciences in Clinical Investigation program, which emphasizes using data to solve real-world public health issues.

"Even when I got into the program, I doubted myself," Uzoeghelu said. "I almost threw in the towel. I wasn’t sure if I could handle such a rigorous program.”

Through guidance from mentors and continued work with his VA doctors, he learned to embrace the person he had become.

“I realized these are the things that make me unique,” Uzoeghelu said. “I wasn't just the only black person in my class. I was also the only Veteran and I was the only one dealing with such complex medical healthcare issues." 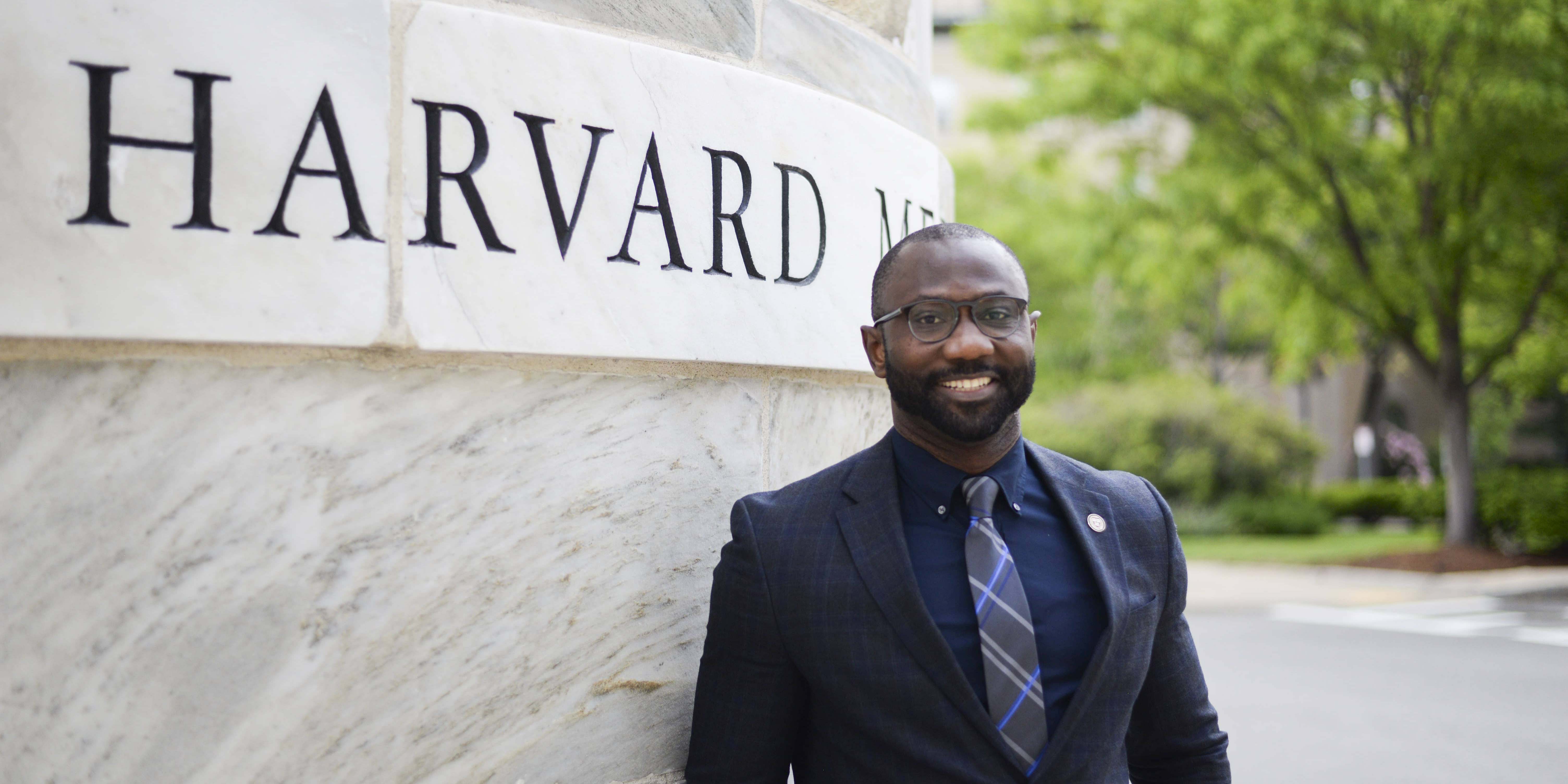 Uzoeghelu graduated from Harvard in May. While at Harvard, he served as the founder of Harvard Medical School Masters Student Council to represent graduate students on all matters pertaining to their general welfare and promote networking and collaboration with other schools across Harvard University. In his role, Uzoeghelu led numerous initiatives for community advocacy within HMS and beyond. This fall, he plans to complete a one-year dual master's program in nonprofit administration. His goal is to take the data he has gathered through clinical investigation with at-risk populations and tailor prevention and treatment information to their specific experience. He wants to create a system of support and trust where anyone can go to receive HIV/AIDS services without the burden of stigma or affordability.

"We can end this epidemic by 2025," he said. "When you look at the numbers in Caucasians, the battle with HIV has largely been won. I want to design programs and policies for key populations that are still heavily impacted. We’ve identified the barriers and we have the means within our reach to reduce the number of new cases.”

Uzoeghelu is a published author and fervent advocate for evidence-based HIV/AIDS public policies. His original research papers on HIV risk behaviors, prevention and care have been published in the Journal of Racial and Ethnic Health Disparities, Journal of Immigrant and Minority Health, and Open Forum Infectious Diseases. His work earned him the 2020-2021 HIV/AIDS Activist Academy Fellowship by the AIDS Action, New England's largest provider of services to people living with HIV/AIDS and populations at risk of infection.

During his Harvard commencement speech, Uzoeghelu implored his classmates to put in the work and never give up on their dreams.

Veterans United Foundation scholarships are awarded to Veterans with a 100% service-connected disability and the surviving spouses or children of Veterans whose death was service related. The foundation has awarded more than $1 million in scholarships since the program’s creation in 2012.

Strong Partnerships That Make A Difference

See all of our amazing partners →